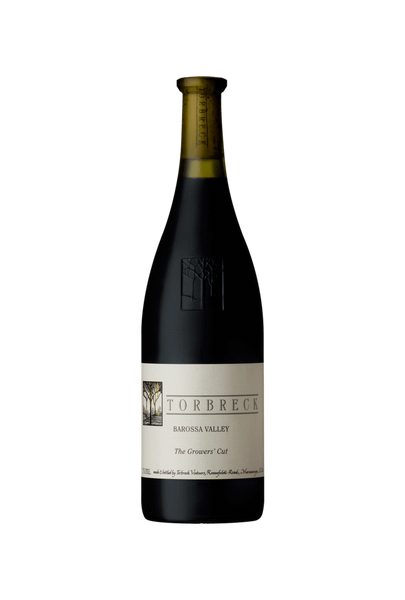 The Growers’ cut is a special release, usually only sold at cellar door that we snapped up when given the opportunity. The Wine pays homage each year to a selected grower whose particular vineyard has best
exemplified the season or produced an extraordinary parcel of wine.

The grapes produced each year for this wine will be one of the traditional Torbreck and Barossa varieties of Grenache, Shiraz or Mataro.

John and Trevor Hongell are the winners of the 2015 The Growers’ Cut award with their unique ‘Block 4’ single vineyard Shiraz, located in the Barossa sub-region of Krondorf.

John and Trevor are a father and son team whose unique soil and attention to detail combine to create some of the most profound fruit in the valley.
The ‘Block 4’ Shiraz was planted in 1995 on black Biscay soils with
rocky red and brown clays. Minimal tillage is implemented and organic composts
are used, together with hard 'spur' pruning. These practices produce low yielding
fruit of immense purity and exceptional consistency.

VARIETAL: 100% Shiraz
REGION: Krondorf; Single Vineyard “Block 4”
VINES: Planted in 1995
HARVEST: 20th February 2015
pH: 3.48
TA: 6.25g/L
ALCOHOL: 15.0%
VINIFICATION: The ‘Block 4’ Shiraz was hand-harvested and immediately transferred
to the winery where it is destemmed into open top concrete fermenters.
It spent 7 days fermenting on skins before being gently basket pressed.
The wine was then transferred to well-seasoned French oak Hogsheads
for 18 months maturation. 2015 The Growers’ Cut was bottled without
the use of either fining or filtration on the 16th September 2016.