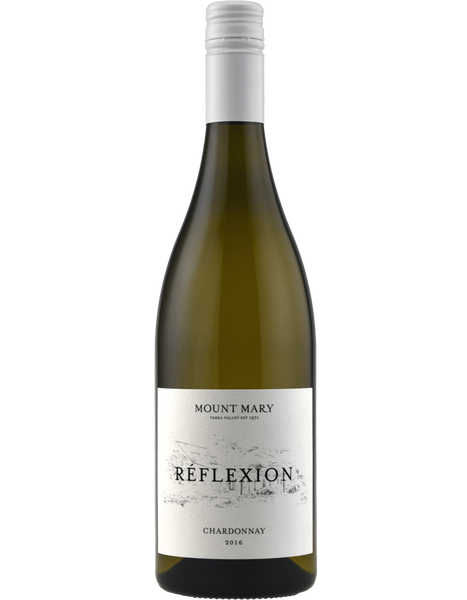 The Mount Mary Réflexion wines are made entirely from Mount Mary estate grown fruit. Primarily from the younger plantings, where the fruit grown on these vines is still developing towards the quality and consistency demanded for our Mount Mary Vineyard estate wines. From time to time, depending on the vintage, will release limited quantities of red and white wines under the Réflexion label. You are most likely to experience the Réflexion brand in selected restaurants across Australia. Each bottle in the Réflexion range reflects a sense of place and time.

Snap them up quickly... The Réflexion depending on vintage and crop sizes would have a blend of the younger vines as mentioned and any fruit from the Estate block which didn't quite meet the quality required for the Creme de le Creme - Mount Mary's Flagship Chardonnay.

The Reflexion range was introduced shortly after the devastating Black Saturday fires in 2009.  Mount Mary, Yeringberg and several other producers deemed the wine unworthy and declassified the vintage or created a secondary label/range.    This 2009 Cabernet/Quintet blend & Pinot were released under the Reflexion.   From memory the Cabernet blend had a slight smokiness on the nose and an interesting char/grippy tannin palate which I felt in time would improve over years ageing.  It created an opportunity for punters to buy great declassified Quintet and Pinot Noir at a steal.  We will have to open one of the 2009's to see hows it drinking...

About the family Estate:

Mount Mary is a family owned, single vineyard estate located in the heart of the Yarra Valley. The region is in the south-eastern corner of Australia, east of Melbourne in the state of Victoria. Established in 1971 by John and Marli Middleton, Mount Mary was one of the first vineyards planted in the resurgence of the Yarra Valley as a premium wine producing region.

The inspiration behind the planting of vines in the Yarra Valley came from the Swiss settlers of the 1850’s. These worldly and hard working immigrants had been greatly influenced by the French wine producers and recognised the climatic parallels the Yarra Valley shared with Bordeaux and Burgundy.